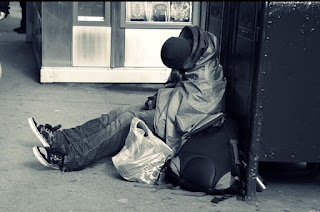 The NY Post is always a barrel of laughs if you aren’t a billionaire looking to subjugate the masses. It’s happy Trump is in office, but still edifies Bloomberg, as if he never left. https://nypost.com/2019/10/05/former-bloomberg-giuliani-aides-blame-de-blasio-policies-for-violent-homeless/?utm_campaign=iosapp&utm_source=facebook_app   Everything the Post accuses deBlasio of doing was perfected by Bloomberg. All his cronies became millionaires via their city hall offices. Schools were closed, retail schools took their place, Fair Student Funding was presented (and accepted by the UFT), charter schools were given space inside public schools, textbooks were tossed en masse to be replaced with Pearson drivel at over a hundred bucks a book, the office of curriculum development was closed (meaning there was no longer a uniform curriculum for any subject) forcing teachers to reinvent the wheel costing each of us hundreds of hours of unpaid time, crime and incidents were now held against schools - hit the threshold and the school was closed. It’s in that environment I worked as a dean in what became statistically the most dangerous school in the country. It went overnight from being very bad to extremely violent. The 27 year old leadership principal didn’t want anything reported and told us if we did the school would be closed down. Teachers were getting robbed and assaulted almost daily and he (the principal) convinced each and everyone of them not to report it. Full disclosure - most of them were very young and untenured. He refused to meet me or even look at me. Surprising because he put me in charge of the department and I reported every single incident via an Orrs report. I also spent at least three days a week down at Courtlandt Ave at suspension hearings.

Ok. Did these thing help? No, things got much worse. Bloomberg wanted the school closed, but we were making our numbers academically, via lowered truancy and via stagnant incident reports. The autumn before Wolcott came in and announced the school would be closed, we had at least five fights per day - three broke out while Wolcott was in the lobby. Kids were making up their classes (including gym) on a computer. I think the programs were connected to Klein’s bs computer company. Bloomy was being thwarted in closing the school, so he made a rule that any teenager that spent over 90 days in Rikers had to be sent to our school no matter what part of the borough they lived in. Things then exploded - we had rapes, attempted murders and everything in between. It was too severe to be hidden, the school went impact and the stats plummeted. Over 300 kids got safety transfers that fall. Bloomy turned us all into ATRs and even while the school was being phased down there was no college office and just a couple of guidance counselors for some profoundly criminally insane teens.

I won’t mention any individual by name of four recent murderers (three homeless) captured in NYC for some horrific crimes. All of them were in our school and were personally suspended by me. These guys are all now  24 - 28 years old. Under Bloomberg they got no mental health care, were suspended constantly and weren’t helped in any way. How many of our former students from the Bloomberg years are now homeless? In jail? Dead? I don’t know, but for Bloomberg to say deBlasio has to do something with  the homeless population ignores his huge contribution to it. When he was mayor he hid the homeless and created thousands more by running schools as businesses instead of social institutions. DeBlasio, under no circumstance, should embrace Bloomberg’s ideology - we voted for him for being a caring, humanist - not another businessman SOB.
Posted by Bronx ATR at 10:25 AM