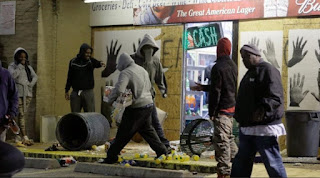 I got home last night after a restful hiatus in the bucolic Hudson, NY. There was a large protest on Sunday in the local park against police brutality. It was peaceful and well represented by all groups, young and old, Black and White, and rich and poor. There was also a police presence there and in front of Hudson Correctional. I got up this morning and my Bronx/Yonkers neighborhood looked like it was invaded by human locusts, which indeed it was. Stores were looted and trash cans burned. These locusts weren’t protestors. They are using Mr. Floyd’s death and the protestors for their own thievery and violence. It’s disgusting and it seems that the mayor and governor don’t truly understand the difference between the looters and the protestors. If they did none of this would have happened. Their fawning accommodations to liberalism for political gain has allowed countless people to get hurt and businesses looted. I would remind them that NYC is one of the most segregated cities in the country.

Segregation condones and manifests the foul intangibility of stereotypes into profound evil. How long before roving packs or individuals take out their fear and anger on those of the offending race? How long before store owners start shooting into the marauding crowds of teens, like the ones we have all babysat for those fake grades and diplomas? I’ve heard many times today that if the schools were open this wouldn’t have happened.   I’ve also heard many times today that if the country was open and people were working this wouldn’t have happened.. There may be some truth to that. (You can bet your bottom dollar you’ll be back in the classroom ASAP, virus or no virus.) But, there’s also the truth that systemic racism is alive and well in this country and our history of slavery, on which this country was built, has not been adequately resolved. Until it is, and dealt with openly, there will always be another Eric Gardner, another jail built, more drug addiction, more welfare, more homelessness and those, let’s not forget those, worthless high school diplomas. The UFT speaks out to honor Mr. Floyd, while staying silent on educational fraud and behavioral negligence. We should all be marching about that.

This is my last post. I want to thank all my readers over the years. Always fight the good fight.
Cheers.
Posted by Bronx ATR at 7:42 PM