A Tale of Two DOEs

I read a fairly disturbing article written by Arthur Goldstein in the NY Post today https://nypost.com/2020/02/22/save-our-city-stop-overcrowding-schools-and-classrooms/?utm_source=url_sitebuttons&utm_medium=site%20buttons&utm_campaign=site%20buttons. Disturbing because it documented the outrageous overcrowding and abysmal conditions he and his colleagues are forced to endure because of overcrowding. Arthur is an excellent writer and based on his passion for education I would have to assume he is an excellent teacher as well. Before Bloomberg closed down the large high schools in the Bronx, I experienced similar problems (and some of the few functioning Bronx schools continue to do so). Our great Chapter Leaders told us we had three days to grieve oversized classes or be stuck with them for the semester. There were some Septembers I had 50 in class. High school classes were and still are set at the maximum of 34 students. Some new teachers were reluctant to grieve, fearing it would reflect negatively on them. Everyone was assured that this wasn’t the case and we all grieved. Not once in my all my years of teaching did any of my classes remain above the contractual limit. The UFT fought and the DOE upheld the contract. Class size is a legal contractual protection and obligation to schools, parents, students and teachers. After Bloomberg castrated the UFT and I became an ATR, I had the vile opportunity to see how other schools were handling their oversize problems.

Many schools cut average sized rooms into two or sometimes three rooms. This is especially prevalent for self- contained special ed classes as the number of students are held at about 15. The rooms are often partitioned by particle board or dividers. These enclosures are claustrophobic and make teaching impossible because everything is unintentionally interrupted by the other classes. Being stuck babysitting in these small confined areas with severely emotionally disturbed students, that you don’t know, is horrific - Close Encounters of the Worst Kind. Mott Hall had the best regular Ed classes I ever taught, but the sped classes (!) - the students were overtly threatening. The most outrageous room I babysat in was a women’s restroom in East Bronx Academy for the Future - again for sped students. The toilets were in there as well as the sinks, but it was the best room in the building. The school was kept at ninety degrees in the middle of the winter and the restroom was fairly cool in comparison. It was also roomy compared to the District 75 classes they had me cover there. Those rooms were basically tiny closets with the platform of the #2 train parallel to the window. (District 75 kids are some the best kids to babysit - they listen and are respectful.)

At one warehouse, a disgusting Evander Child’s campus school, I covered some classes that had over fifty on the register. (Often an ATR’s classes could regularly get to that number, because students who wanted to cut their classes would come in knowing that we didn't know the students. If I asked a student for ID, I would usually be threatened and cursed at. After I would call a dean the student would leave and come back after about five minutes with a big smile.) At that dump I went to the Chapter Leader and was told matter of factly, that the DOE doesn’t uphold the contractual limits. Every class there was filled to the rafters - kids were on radiators, the floors and a few of the thinner girls were sitting in the half lockers - reminding me of Eddie Munster sleeping in a drawer in my favorite childhood TV show. The teachers there were basically all traumatized, as it had a young inexperienced principal, very challenging students and it was a renewal school. They had one room that was completely filled (and unlocked) with hundreds of thousands of dollars worth of laptops. That was the theater room. The kids sat on the boxes. What I’m getting at, is everything takes precedent over students’ learning. They are the absolute last item to be considered. Some may argue that teachers are last ,and there can now be an argument for that claim. We used to have a union that would fight for us and vis a vie our students. What’s usually best for us is what’s usually best for students - especially in regards to class size. How does the DOE treat its staff in regards to physical space? While I was reading Arthur’s article I pondered that question. The next article I read, by Sue Edelman, answered my question. https://nypost.com/2020/02/22/richard-carranzas-new-tweed-courthouse-office-is-fit-for-a-king/?utm_campaign=iosapp&utm_source=pasteboard_app 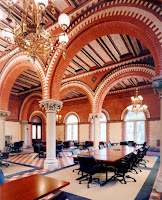 Sue’s article described the Chancellor’s new office in the Tweed building. Now, I’ve known many principals that have had extravagant tastes. My favorite had a penchant for Mid-Century Modern and filled his office with Herman Miller, Vernon Panton, Vico Magistretti. Most there thought they were cheap second hand furniture. I knew that his least expensive chair retailed for over $7k. He had great taste and I really couldn’t fault him as they were his personal property. This was in stark contrast to the majority of buffoons that imitated Trump’s favorite style - Louis XIV. Those guys also usually had the only air conditioner and a private restroom, of course. Well the Chancellor puts them all to shame - his new digs resemble the past splendor of the Alhambra. Incredulous in the clueless appearance it creates to everyone that looks at a top heavy bureaucracy with thousands of struggling kids and teachers. Isn’t it time to put ‘Students First’?