Why Does Bloomberg Reference the UFT as Proof He Treated Teachers Well in NYC!? 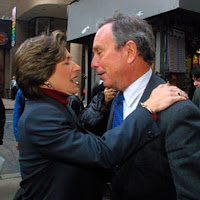 At last night’s debate, the Warrior Princess Warren went on the attack again against Bloomberg (G-d bless her for that). She threw her ax while recalling how she lost her sped teaching position due to pregnancy at the age of twenty one years old. She said it could have been worse - if she was in NYC while Bloomy was mayor, she would have been told to kill it, as Bloomy told an employee. Bloomy was outraged! He claimed to have never uttered that statement and said he treated NYC teachers very well, just ask the teacher's union! At that point I fell off my recliner and lost consciousness for several minutes. My daughter had to revive me with my last piece of Christmas marzipan. While regaining my bearings and gobbling my medicine, Warren was on the attack again over non-disclosure agreements - to which Bloomy continually replied he had released the signers from the agreements.

Let's look at this in detail. Did Bloomberg tell his employee to kill her child? I've read many times, before he decided to run as president, that he had. He wasn't outraged over the accusation, indeed it was recently grouped as one of his sexist comments and was referenced by the media during his great apology tour to African Americans, Hispanics and Women. Now as for Warren's outrage at the comment - doesn't the entire Democratic Party tell all poor women to do that when they allow abortion on demand - up to the moment of the child's first breath? Who does she think is getting abortions? Poor women of color that don't see an option for any number of reasons - the most prevalent being economic. Some people regard abortion as state sponsored eugenics.

Now let's get into the Twilight Zone - Bloomy's claim he treated NYC teachers well and could prove it via the NYC teacher's union (the UFT). For anyone reading this, that doesn’t know Bloomy’s reign of terror on teachers, he closed numerous public schools, turned veteran teachers into babysitters (he wanted termination but was stopped by LIFO), gave schools to for profit charters, used an enormous squad of lawyers to fight teachers constantly over all matters big and small, divided up contracts among his friends, open a retail management program for aspiring principals, hired overwhelmingly young white inexperienced rubes to replace veteran teachers, attempted to raise class size to Preposterous levels, and he gave Chancellorships to folks that were woefully unprepared to lead the school system.  He also went about replacing textbooks, computer programs, furniture etc. with his designated choices. This was done in conjunction with getting rid of the office of curriculum development and every facet of NYC school governance that unified schools. He took sole control of the schools away from the Board of Education. Everything was now micromanaged and teachers were required to reinvent the wheel at every juncture. Schools were now set up as mini businesses with individual budgets that would preclude the unnecessary expense of having an experienced teacher. The business model in all it’s glory. Unbelievably most of this still remains with us. This was all facilitated by the Randi Weingarten 2005 contract -  after which she left and became the AFT president. She was replaced with Michael Mulgrew who was completely unprepared to meet the challenge of a tyrannical dictator. He basically stopped speaking to the mayor until Bloomy eventually left. He did so after finishing a third term against the city’s by laws.

Why would Bloomberg reference the teacher’s union as proof that he treated teachers well? I can only assume that he has someone highly placed, who was the head of the teachers union at the time of the 2005 contract, that would ratify his claim. This person would have to have be none other than Randi Weingarten. There was a recent New York Times report that he met with her before deciding to run for president. There was a recent article in which she said she believed Bloomberg could beat President Trump. Randi is the same person who helped steal the democratic nomination from Bernie Sanders by saying she took a poll - in which the AFT members endorsed Hillary Clinton.  There was no such poll, of coarse. There was a deal for her to become Secretary of Education with the almost certain outcome that Hillary would be elected. Now I don’t know about you, but I’m weary of Randi Weingarten.  https://www.wsws.org/en/articles/2018/05/09/bloo-m09.html   Bloomberg’s crap from the 2005 contract is still being lived with on a daily basis. We still don’t have a board of education. Teachers are still being micromanaged and the budget is still individualized. Veteran teachers here are still targeted and there is still an army of lawyers remaining from Bloomberg’s reign.

I hope the newspapers or candidates ask anyone, other than Bloomy’s employees or Randi Weingarten, how New York City teachers were treated during his reign of terror.  I’ll discuss the rest of the debate at another time as the Twilight Zone comment happened almost right at the start and took up almost this entire post. Cheers.
Posted by Bronx ATR at 8:13 AM