Who Will Fight for Democracy? 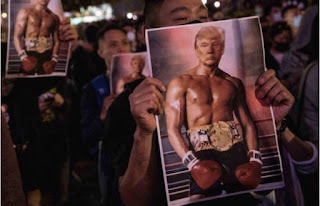 Way back in the 1980s, I had a good friend, Harry, who had  immigrated from Hong Kong. He and his family did this via Canada. His family were billionaires and Hong Kong was going back to China in 1997.  His father made a preemptive decision to immigrate to England. England denied his family’s request to relocate (as they did most Hong Kong families), even though they were British citizens. So the family went the Canada to New York route - the same route many Irish, Jamaican and former British subjects went. Harry’s family had a lot of money they wanted to invest and Harry’s father became enamored of Donald Trump. He was trying to get involved in a Trump plan to buy David’s island off New Rochelle. Harry was a character - his accent was a mix of Chinese and English, he was effeminate and overweight. Harry could make a cat laugh and liked to imitate Trump way back then. None of us knew Trump well enough to know if the imitations were true - we just laughed our heads off. Many Chinese billionaires helped Trump repeatedly during the 1980’s - they liked him and responded to his luxury label and ostentatious lifestyle. It was at this same time  Tiananmen Square played out. It reinforced his father’s decision.

Over the years, I lost touch with Harry, but thought of him when I watched Hong Kong’s citizens fighting for democracy. I kept hoping Trump would get involved. I promised my conservative friends - who assured me Trump would help - that I would vote for him if he helped Hong Kong and democracy. Much to my surprise he is attempting to do so. https://nypost.com/2019/11/28/rocky-shock-for-china-makes-trump-hong-kong-hero/?utm_campaign=iosapp&utm_source=message_app
https://nypost.com/2019/11/30/rocky-trump-in-hong-kong-what-a-weird-world-it-is/?utm_campaign=iosapp&utm_source=pasteboard_app
As I look at the Democratic Party’s presidential candidates and their continual equivocations to everyone, as well as their concerted efforts to be politically correct - while at the same attempting to have a unique message - I am nauseated. Then there’s Bloomberg.  If I’m to be perfectly objective, he’s the best shot they have.  They absolutely do not want Bernie.  So who is it going to be?  Bloomberg or Trump?
Posted by Bronx ATR at 8:01 AM